You are here: Home / Roulette News / Blackjack Casino Game on the Rise on Facebook 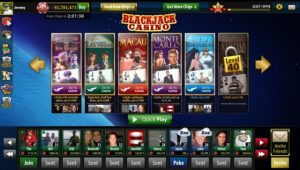 Most people do not think about gambling when it comes to Facebook, but there are plenty of casino games that have entered the sphere of the popular social media website. Instead of farm games, zombie games or other types of games that most people could not care less about, the Facebook casino games are actually picking up some steam with a large percentage of users.

Blackjack Casino is the name of the most popular Facebook blackjack game, and it has a new version coming out for iPad in July. There are also versions expected to come out for iPhone and Android later this year. The fact that you can sync your Facebook account with the game means that you can play the game over a large number of different devices. It does not matter if you are playing from your tablet or your smartphone when you play this game because you will still be able to play with the same chip count. Blackjack Casino is available in 15 different languages, and it has been developed by Bee Cave Games.

The good people at Bee Cave Games have also announced that they will soon have a deal with Gaming Laboratories International to make sure that every aspect of the code of the game is fair.