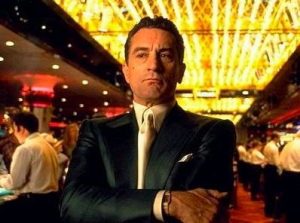 As you walk into the Paradise Walkerhill Casino in Seoul, South Korea, you may be surprised to see a brand new photograph of actor Robert De Niro welcoming players to the gaming tables. The photo, however, is not a fluke; it’s just a bit of strategic, Hollywood-style advertising for the popular resort.

In a new promotional campaign, the Paradise Walkerhill Casino is hiring high-profile celebrities to help promote its glamorous gaming room. Ads featuring the actor are appearing all over Seoul, and De Niro can also be seen in a series of ongoing commercials for the casino.

Undoubtedly, this marketing campaign was influenced by De Niro’s star turn in the 1995 movie “Casino,” and apparently the connection has taken hold of the public, as the current campaign is reportedly a successful one. As with many overseas celebrity endorsements of this type, however, De Niro has a stipulation in his contract that the ads will not appear in the U.S. market.

De Niro isn’t the only one cashing in his celebrity chips, however. The actor is just one of several A-List performers being hired to help promote high-profile casinos throughout the world. Singer/songwriter Kenny Rogers is also actively working as a paid spokesperson for the industry, appearing in commercials for the Barona Casino in California. No doubt, Rogers’ hit song “The Gambler” served as an inspiration for this particular ad campaign.

In another take on celebrity advertising, the Hard Rock Hotel & Casino in Las Vegas has begun a series of audio on-hold phone messages featuring top musicians performing at the resort. The inaugural recordings feature Motley Crue’s Nikki Sixx, and Hard Rock promises that more celebrity-recorded messages will be forthcoming.

With the continuing boom in casino revenues, it’s no wonder that celebrities are flocking to become casino spokespersons. During this past year, Las Vegas casinos have reported $5.77 billion in revenue, while Atlantic City casinos have reported $3.57 billion. With numbers like these, it’s a sure bet that more casinos will be adding celebrities to their ad campaigns worldwide.