You are here: Home / Roulette News / China Emerges as a Casino Power-House

China Emerges as a Casino Power-House 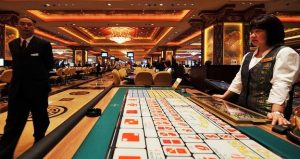 Macau, a former Portuguese island colony, was returned to Chinese authority in 1999 and with it the chance to build a new “Vegas Strip” but now in Asia. Progress started in 2002, and the results are starting to show.

Located on the southeast coast of China, Macau already has its own version of Venice, complete with Grand Canal and a Rialto Bridge. Soon there will also me a modeled Palace of Versailles and Eiffel tower with a restaurant containing 200 tables. But this in not all. The casino scene in Macau is rapidly growing. Companies such as Sands, Galaxy Entertainment Group and Wynn Resorts all want a share of the cake. These companies are all USA based and all have large casinos and resorts in Las Vegas. They believe that the market share in Asia is on a sharp increase as there are over a billion local players alone. And statistics released on March 3 showed that gambling revenue in February had jumped 40 percent from a year earlier, to a record $4.8 billion.

The big difference between Macau and The Las Vegas strip are the resorts. In Las Vegas everything is surrounded around the casinos and how they make the money. The resorts here however trying to cater more towards a family vacation. New sites include luxury shopping arcades, spas, swimming pools and ballrooms. A link to a local family theme park is also in the works.