You are here: Home / Roulette News / Online roulette may be heading to Washington, D.C.

Online roulette may be heading to Washington, D.C. 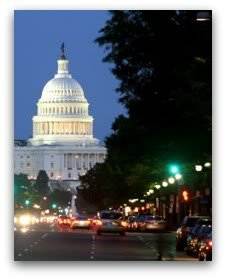 While online gambling has been having its heyday in Europe, the United States has been slower to embrace the industry. That may be all about to change, as pending legislation could set up between 20 and 30 online gambling hot spots in hotels, bars, clubs and other venues across the city.

The move comes as part of the city’s 2011 budget proposal, and could take effect in late summer provided Congress doesn’t reconvene to reconsider the issue in the meantime. Games that would be included in the program include Texas hold ’em poker, online roulette, live roulette, slots and more.

“We would make these games available at certain locations that might be similar to social atmospheres in taverns, hotels if they’re interested,” Buddy Roogow, Director of the DC Lottery and Charitable Games Control Board, told MyFoxDC.com.

Roogow also highlighted the fact that the games would be open to visitors and residents alike would be able to take advantage of these hot spots, adding “you don’t have to live here, but you do have to be here.”