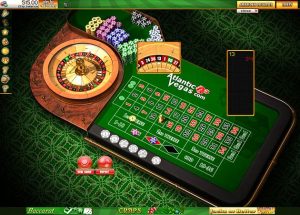 Real Time Gaming (RTG), game supplier of premium casinos such as Bovada and WinPalace, recently added a new French Roulette game to its Specialty Games. This surprised many in the industry as RTG had been spending a lot more time building its Real Series portfolio of online slots games. Most gambling software producers place variants of roulette under a ‘Table Games’ category. RTG had followed this convention for the most part. For reasons that the company has never revealed, they made the exception for French Roulette.

French Roulette is played like European Roulette. Among the distinctions is there is only a single zero on the wheel. Another difference is instead of a black or red background, this numbers on this variant are a uniform red. Players can distinguish the color from the wheel. It clearly shows the number on which the ball has fallen.

For more reasons unknown, RTG decided these games will essentially be played in French. Or rather, all the bets are named in the language. So players need to adjust to the idea that odd and even are pair and impair. Black and red become noir and rouge. Also, the number 3 street and number 6 bets are transversal and soixante, respectively.

RTG’s French Roulette gives players the opportunity to save patterns. This is because many players prefer unique patterns based on their personal lucky numbers. RTG allows players to create a pattern on the layout and save it as a Favorite. They can save up to eight. After that players can open Favorites, select a pattern and place a bet. This variant of French Roulette also has Autoplay.

Founded in 1998, RTG has a number of online casino licenses. A long standing software developer, they are a highly respected contributor to the gaming industry, being active in the iGGBA and Interactive Gaming Council. Many of the more popular online casinos are powered by RTG. Considered one of the more realistic platforms on the Internet, RTG has in the vicinity of a hundred games, played with both fun and real money.