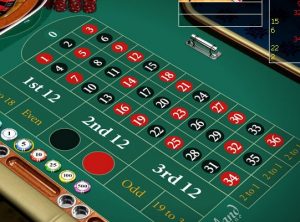 Roulette lends itself to system play. Numbers on the board and sections of the board are productively divided into groups, and each of these can be bet upon individually, as well as along with heads up bets on individual numbers. Systems form around these blocks of numbers. They include betting the colors, red and black, and the dozens and rows or columns.

It is possible to bet exclusively on dozens during a roulette session, and many players do so quite successfully. Consider the odds. Every number landed upon must fall into one of the three dozens, unless it is a zero. The zero can be a game-breaker, but it is possible to hedge against it to minimize or eliminate that risk. As for the dozens, one effective way to bet upon them is to simply watch the board until a pattern develops. Again, since every number other than zero will fall into one of the dozens and there are only three, then the odds are that each dozen will be landed upon every third spin. Of course, most roulette players know that over the course of only hundreds of spins, the odds will not necessarily rule. Therefore, it often will turn out that one dozen will not receive one third of all spins during a single roulette session, even lasting a few hours. Still, it is reliable to expect spins to be close to evenly divided between the dozens. Therefore, if a player notes that the ball has not fallen into one, or even two, of the dozens for an extended number of spins, placing a bet on that dozen makes sense. Some players wait only for five spins to pass without a dozen “hitting” before betting on that dozen. Some players will wait seven or more spins. The more spins that pass without the ball landing in a particular dozen, the more likely it becomes that the ball will land in that dozen on the next spin.

Unfortunately, this system is not without risk. It is very common for one dozen to be missed on ten, twelve, or even fifteen or more spins, before it is landed upon again. Such a dozen is commonly called a sleeper. It is best to use a progression when following a dozens system, such as the Martingale progression or another, but if one does so and encounters a sleeper, then his or her bet will get very large, very quickly. In many American Indian casinos, there is a low betting limit on roulette tables, such as $29. If a bet starts with one dollar and doubles with each miss, then there will only be five possible double bets, with a sixth bet of less than double. If the player starts betting after only five misses of a dozen, he or she will reach the betting limit on only the eleventh round, and if the dozen sleeps to twelve rounds or more, then the bet will be lost. The player may also wish to hedge the zeros, with a one or two dollar bet on the 0-00 split on the American board. On the European board, there is just one zero.