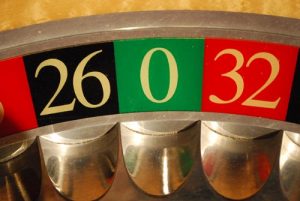 The American roulette board has thirty eight numbers on it, including numbers one through thirty six, plus 0 and 00. The European roulette board has thirty seven numbers, with just a single 0. The zero might be thought of as a non-number in roulette, as it does not fall into any number group. All bets, except for bets on a zero itself, automatically lose when the ball lands on a zero. For this reason, the zero is regarded with great trepidation by most roulette players.

At the same time, it is possible to bet upon zero, and a bet upon zero pays with the same rate of return as a bet on any single number, i.e., thirty five to one. On the American board, there is a split between 0 and 00, and it is possible to bet upon this split. The split pays seventeen to one. A bet on zero or the American split can be taken as a hedge against zero or for what might be called insurance. If, for instance, a player bets on one of the dozens, he or she might also place a small bet on the 0-00 split. If the ball lands on a zero in that instance, the dozen bet will be lost, but the bet on the split will be won. That bet might actually pay more than is lost on the dozen.

Roulette gaming systems have also been devised that focus on the zero. One simple system only notes that on the American board, each zero has a thirty seven to one chance of being landed upon, with the 0-00 split having a nineteen to one chance. Where zero has not been landed upon for a larger number of spins, one might wager that it is “due” and will be landed upon within just a few more spins. The zero bet is profitable, with even the American split paying seventeen to one, so that if it takes even several spins for the ball to land on the split, the bet still wins. If, for instance, the ball has not landed on zero for thirty spins, one might wager that it is likely that the ball will land on zero within just a few more spins, and begin betting it. On the American board, the split bet may be the most sensible, and is the least costly, and since the payoff is seventeen to one, the player might bet the split for ten times or more for one dollar or even five dollars per bet and still win money if the ball lands on zero before the forty seventh spin.

Unfortunately, one must remain mindful of the gambler’s fallacy. It holds that past spins in no way predict future spins. The mere fact that the ball has missed zero for thirty, forty, or even fifty or more spins cannot be taken to prove that the ball will soon land there. At the same time, mathematics does prove that the ball will eventually land on a zero. It must. Hopefully for one betting on it, it will before the player runs out of money.