You are here: Home / Roulette / Newcastle Owner Wins £1.3M on a Single Spin 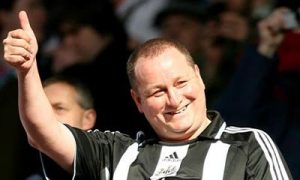 Billionaire owner of British football club Newcastle United, Mike Ashley, walked away with £1.3 million as he placed a complete bet on the number 17. A “complete” bet entails betting on all possible combinations for a number, so in this case: strait, odd/even, red/black, split (x4), street, corner (x4), and six-line (x2). This totaled to an astounding bet of £480K, on one number!

Luck was on Mr. Ashley’s side as he spent less than 15 minutes in the casino before winning his millions. Mr. Ashley has always been camera shy so he refused to give comment, however London casino sources are quoted saying “This gentleman certainly knows his roulette, and left no stone unturned when he played." Ashley is not always so lucky however, last year his loses were reported at an astounding £129 million. This is a small drop in the water however as he bout Newcastle United football Club for roughly £13m million.