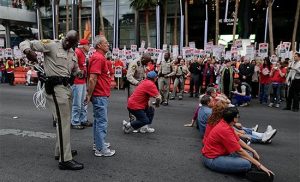 This Thursday union members of the Culinary Union of downtown Las Vegas are voting weather or not they will strike if ongoing bargaining doesn’t yield new contracts with 10 downtown Las Vegas casinos, a bar, and a laundry service. Contracts that expired last summer. This could be the first major strike since the mid 1980’s where workers held a strike for 6 years before they were given the compensation they wanted.

Many union workers are enraged that no new contracts have been signed. They fear that they will lose healthcare insurance, workers benefits and work hours due to unresolved contracts. If the Union decides to strike this could negatively affect the local Las Vegas economy, just as it is beginning to bounce back from Americas nationwide economic recession. Major casinos along the strip have settled agreements with their workers, but the downtown area is yet to do so.

The outcome of this union strike could go many ways. The Union workers hope that by striking the casinos will round of the negotiations so that they can go back to work with new and improved contracts. Economist believe that the casinos could fire all employees participating in the strike and hire new staff, in the long run this would cost the business more money as they would have to interview and train all new staff members. Whatever the outcome, locals and potential guests to the gambling city hope to see the strike resolved so that the city can run as per usual.